Vernons Bingo is a popular online bingo site that caters to players primarily based in the United Kingdom, and its generous promotional bonuses and sign-up offers ensure that players both new and old can enjoy a high-quality and lucrative bingo gaming experience.

With a wide range of progressive jackpots, a huge range of online bingo games and speedy withdrawal times (not to mention the adorable dog Stan who has become a focal point for their marketing campaigns), it’s not hard to see why thousands of players have joined the site so far.

In this post, we’re going to look at some of the biggest reasons why you might want to consider joining them too. 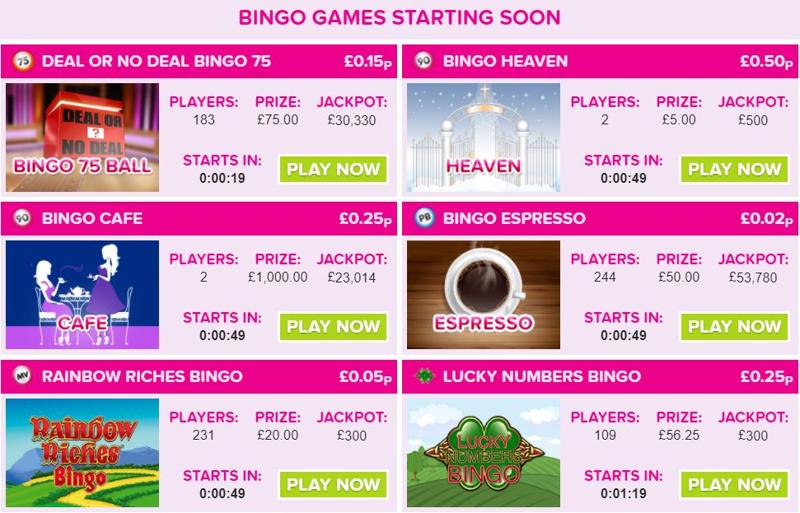 Vernons Bingo offers a top class range of bingo games for you to enjoy, and a huge number of their games have jackpots attached too, ranging from a few hundred pounds all the way up to 5 and 6 figure prizes.

Bingo Ballroom is one of their most popular games – the £40,000 jackpot presumably has something to do with it – and with a new game beginning every 5 minutes, you won’t have to wait long to grab yourself a ticket and take your chances. Boasting an impressive average player count of 400, there’s always a decent guaranteed prize on offer, and while it’s a 75-ball variation it’s still just as much fun as many of the 90-ball games, so be sure to check it out for yourself.

If you prefer classic 90-ball versions then you’re spoilt for choice, with rooms like Bingo Heaven, Bingo Café, and Rainbow Riches Bingo all available, and starting from as little as 2 pence per ticket.

Interestingly, Vernons Bingo also offer some 80-ball games, with their most popular being ‘Bingo Team Room’. Tickets are just 5 pence, and while the prize is only an uninspiring £35, each game offers a jackpot of £500, which is more than enough to tempt most players in.

Other games worth mentioning include Who Wants to Be a Millionaire Bingo, which offers 10 pence tickets and an eye watering £1,000,000 jackpot; alongside Bingo Espresso and Deal or no Deal Bingo, both of which feature jackpots worth over £20,000.

Rather confusingly, Vernons Bingo don’t combine their casino table games and slots with their bingo rooms like most sites do. Instead, they opt for giving them all their own dedicated navigation tabs at the top of the screen.

Head to the ‘Games’ tab and you’ll see a number of slots, arcade games, scratchcards and progressive jackpot games to enjoy, with titles from software providers like Barcrest and IGT.

Some of the most popular slots include: DaVinci Diamonds, Rainbow Riches, Bouncy Balls, Clover Rollover, The Winnings of Oz, and Fluffy Favourites.

If casino table games are your go-to while waiting for the bingo to start, you’ll have to make your way to the main casino as, unfortunately, there aren’t any built into the bingo software itself.

Still, Vernons have managed to extend their range of games quite substantially compared with most sites, and you’ll find Roulette and Blackjack, a Live Dealer Casino, plus other card and table games on offer.

There’s also a much larger selection of slots where many Playtech games can be found, such as Great Blue, the Pink Panther and Age of the Gods: Furious 4.

In their own words, Vernons Bingo “goes the extra mile for all our players, but for an exclusive few, we truly roll out the red carpet”.

Indeed, the VIP scheme at Vernon’s is incredibly personalised and it’s all handled by a lady named Becky. They may want to consider adapting their wording here though, as things get a little weird when one of the VIP perks on offer is “a personal relationship with Becky herself!” Hmm…

Putting this aside, some of the other perks you can look forward to include bigger bonuses and exclusive promotions, such as real cash prizes, luxury gifts and exclusive invitations to events hosted by Becky and the Vernons Bingo team.

Unfortunately, details on how to become eligible for the VIP scheme are shrouded in secrecy, and the official guidance from the site is as follows:

“Becky carefully chooses all of her VIPs personally, she keeps the details about how to get an invite a close guarded secret. The biggest tip we can give to anyone who wants to get their hands on a golden ticket is to keep playing on Vernon’s Bingo and be prepared to receive your golden ticket when you least expect it.”

Vernons Bingo offer a small but carefully chosen range of payment methods for you to take advantage of, and you’ll be able to fund and withdraw from your account using most major debit cards, along with some popular EWallets such as Skrill, Neteller, Paysafecard and PayPal.

Minimum deposits and withdrawals vary depending on the method you use, but generally it’s either £5 or £10, with most cards offering deposit minimums/maximums of £5 and EWallets generally commanding a £10 minimum.

In terms of withdrawal caps, Vernons limits players to £5,000 per day, although VIP’s and players who come to a pre-arrangemed agreement with the site may find themselves able to increase this limit. So, if you’re planning on playing heavy, you may want to enquire about this beforehand.